How La Redoute Ran a Test Campaign to Increase their Profitability

In the E-commerce industry, everyone is talking about Quality Assurance and the importance of testing to provide an excellence customer experience. But how does testing really unfold? What are the concrete benefits of testing? In this blog, we’ll share with you real experience of a testing campaign of La Redoute.

Who is La Redoute?

La Redoute is specialized in ready-to-wear clothing and home decoration and is present in 10 countries. La Redoute has made a strong shift towards e-commerce, which today accounts for 78% of their total turnover. Since e-commerce vital to the success of La Redoute, they decided to further improve the customer experience by providing at mobile app.

Since La Redoute wishes to show excellence in everything they do, they decided to have their product tested to verify that it would provide the positive experience that they desire.

La Redoute had the app tested in 7 different countries to make sure that everything worked perfectly in the varying environments and to get feedback from their local target audience.

The testing process entailed tapping into a crowd of professional testers to perform exploratory tests.

At the end of the test campaign, 74 bugs were identified. The bugs had varying ranges of consequences and were of different types from functional, graphical, performance, to ergonomic bugs.

Certain bugs were found on certain iOS versions or devices that were not found on others. The La Redoute’s desire to test on a varying range of devices thus paid off. 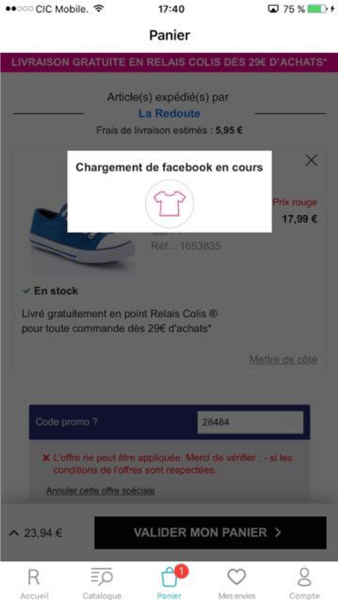 The fact that La Redoute was able to identify and repair this bug, unblocked a barrier in the checkout process that would have affected many customers. Thanks to their testing efforts with StarDust, the company is now profiting from each customer that is connecting with Facebook. With just one of their 74 bugs that were found, La Redoute benefited from a clear ROI.

If you would like all the details on La Redoute’s testing campaign with StarDust, download the full case study. You will see the details of the testing approach, the statistics on the bugs that were found, and other concrete bug examples.

3 Things to Consider before Migrating to Magento 2