Women and Tech : Why Gender Disparity Hurts the Industry and How We Can End It

March 8th is International Women’s Day, a day dedicated to celebrating the social, economic, cultural and political achievements of women. However, it is also a day to promote the end of gender disparities.

Significant strides have been made over the past 50 years resulting in greater equality for women. Today, there is greater access to education for women as well as employment opportunities. More women are also holding office as well as positions in the government.

However, there is still a significant lack of gender parity that limits opportunities for women. This is especially true in the technology industry.

When it comes to the tech industry, women are underrepresented. According to the Women in the Workplace 2017 report by McKinsey & Company and LeanIn.Org, American women made up only 37% of entry-level tech positions. For senior management positions, women only occupied 25% of these roles and only 15% of C-level positions like CFO, CEO, and more.

These numbers are reflected at multiple levels in some of the largest tech companies including PayPal, Facebook, ebay, Twitter, Apple, Google, and Microsoft. 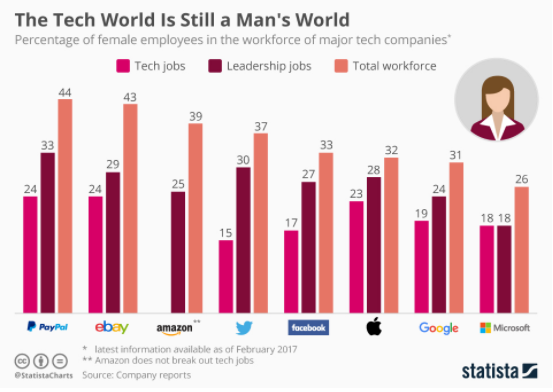 The gender disparity in the tech industry is not unique to the United States; it exists everywhere including both Europe and Asia. According to the Eurostat and the European Commission, women in EU countries hold only 18% of the positions in the tech industry. This figure differs between member states, women do not hold more than 32% of positions in the industry in any EU member state.

Additionally, the statistics are even worse when it comes to women of color who faced greater amounts of discrimination. 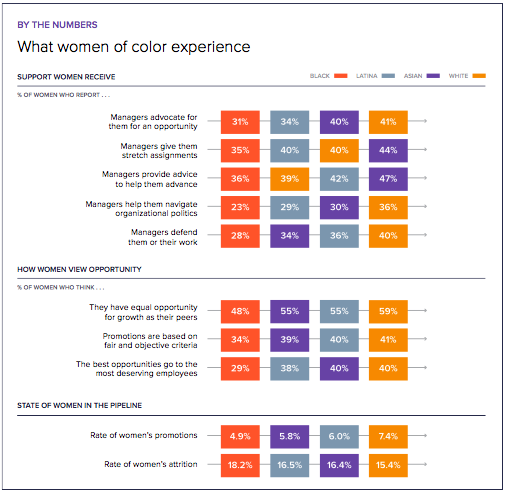 Source: Women in the Workplace 2017

The Role of Education

With an unequal number of women in STEM, it can be harder to achieve gender parity. Studies have shown that men are more likely than women to pursue careers in STEM, despite the fact that women perform just as well as their male counterparts in math and science. Nonetheless, it is essential to look at the role expectations.

While a lack of gender diversity amongst graduates from the STEM subjects does contribute to gender disparity in the workforce, it is not the only factor fueling the problem.

The lack of women pursuing careers in STEM does not explain why women are more likely than men to leave careers in STEM. For example, women are twice as likely to leave the tech industry than their male colleagues. What does explain this disparity is the fact that many tech companies operate with a pro-male or “bro” culture that creates an uncomfortable and discriminatory workplace culture towards women. This culture results from a lack of diversity and can become harder to root out overtime, especially if the company is successful.

A pro-male culture creates greater hardships for women, which can lead to higher attrition rates for women. According to the McKinsey Global Institute, 38% of women in the tech industry feel that gender discrimination hinders growth and opportunities for career advancement.

A survey of women working in the tech industry in Silicon Valley also highlighted the pressure and discrimination women face. The findings included the following:

While evidence obtained through the survey only focused on Silicon Valley, it is clear that a workplace dominated by men can result in a workplace culture that is hostile to women, and, as a result of this hostility, drive more women away at a higher rate than men.

Why We Need More Women in Tech

Lack of female participation in the tech industry is not just a woman’s problem. It is a problem for both men and women with multiple implications that hinders our society.

First, gender disparity in tech is a drain on the economy. According to the European Commission, an additional €9 billion could be added to the economy if more women worked in the tech sector.

Thirdly, the tech industry is major job creator. Unfortunately, there are hundreds of thousands of positions that remain unfilled due to the lack of qualified applicants. The inability to fill these positions will ultimately hinder the industry’s growth and companies’ ability to innovate.

Lastly, gender disparity in the tech industry is a human rights issue; it deserves everyone’s full attention until its eliminated.

How can we create a more gender diverse tech industry? There are many actions we can take. Nonetheless, here are five guidelines any company could take towards ending gender disparity in the workplace.

Don’t just talk the talk, but walk the walk

While many companies and their executives place gender diversity on their priority list, not many actually take consistent actions to support it. Creating a real, comprehensive plan and implementing it is a simple way to ensure the company is working to become more gender diverse.

Sometimes, good employees can be subconsciously sexist. This is does not mean that they are sexist, but rather influenced in subtle ways by a society that is sexist. Employee training can help people become aware of their gender biases, which can go a long way in creating a more equal workplace culture.

Get rid the bad apples

Regardless of intent, company policies especially those that determine employment, salaries, and promotions can be gender biased and place women at a disadvantage. Reviewing and eliminating existing policies that are gender biased can ensure that new efforts will not be sabotaged.

Regardless of the policies or actions companies take to increase gender diversity, it is essential to track, analyze, and share the results to ensure that the company is holding itself accountable. Sharing this data with employees can also help to spread the importance of these efforts.

At the end of day, the tech industry is hampered by clichés and stereotypes. You do not have to be a genius to work in tech nor do you have to be a man. Companies can take steps to highlight this fact, especially during the recruiting process, to attract more female applicants.